Seeking Dynamism in Space and Information

My Work is More Programming than Design

Even in XD, I’m more of an IT person than a design person. My research is close to what the SFC program calls CI (Cyber Informatics). Right now, I’m putting my energy into researching CityCompiler, a system to support the design development of spatial information systems. For example, if you’re making a video installation or digital signage in a museum or town, the presence of people makes it impossible to test the work before the actual run. Having only one chance on site means that if things don’t work well, or if they don’t look as you expected, it can be disappointing. As someone who has created a number of video installations, I know that unfortunate feeling all too well.

This led me to create a simulator system that would allow testing on a computer in preparation for the actual run. Digital signage is lined up at Shinagawa station’s Minato Minamiguchi exit. I recreated each space in 3D, which allowed me to examine how the video looked and whether or not onlookers enjoyed it. You can also move the point of view of the viewer, allowing you to see how the video would look while walking at different speeds or while standing still. We found that when we played a video of a character walking, it looked most natural when the character’s walking speed matched the speed of the onlooker. In this manner, we are designing systems with the theme of scaling space and time.

My students are engaged in a variety of research. Among the graduates this year, one student created a “drawing system” that drew cute illustrations by repeating “exaggerations” little by little. Another used Perl to construct and verify a mechanism for increasing the speed of positional information searches. Others have developed social networking apps for smartphones that shared constellations made with the night sky, and support services for borrowing and lending goods using mobile phone cameras. 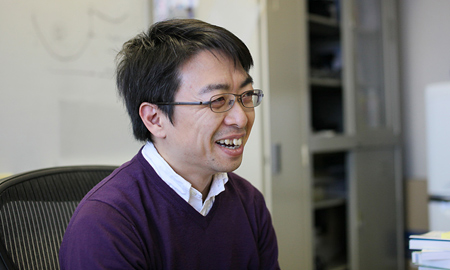 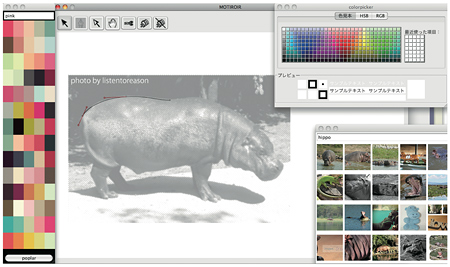 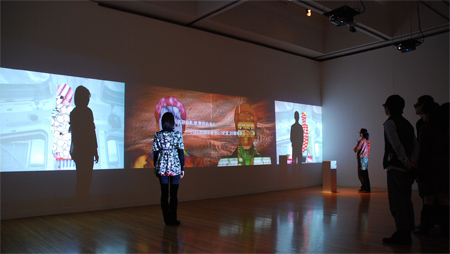 Nakanishi Lab is considered to be strong in media arts. This is probably because I present media art at venues such as ICC (NTT International Communications Center). I’ve also exhibited work on literature I created together with novelist Kei’ichiro Hirano at museums. Other activities I am engaged in outside of research include “Idea Camp”, which holds meetings outside to create ideas. We’ve published a book called “Idea Camp” of conceptual techniques using analog tools like pen and paper instead of IT. We advocate these ideas at a variety of venues with people in industry; just the other day, we appeared at “3331 Arts Chiyoda”, a former junior high school that has been renovated as art institution.

While I work hard in all of these ventures, to me these are all extracurricular activities. On my website, I’ve divided my research and media art into separate sections labeled “Research” and “Works”. In media art and Idea Camp as well as in spatial information design, I’m interested in creating “dynamic places”. I’m a soccer fan, and I think there’s something similar in soccer games. If dynamic places are created, it doesn’t matter whether they are digital or analog, whether we use our minds our or bodies. Three years ago I started the Brazilian martial art capoeira. Even here, it’s the same thing. While it’s a martial art, it’s not about landing blows on your opponent, but rather about repeating attack and defense while matching the timing. The moment-to-moment dynamism that this results in is interesting. I engage with a variety of things in this manner, including some that some may think elusive.

There is Nothing That Can’t Be Learned in 10,000 Hours of Practice

I didn’t start out with the skill to create works of art and come up with ideas. I didn’t even start to really learn programming until my Master’s. It didn’t make sense to me as an undergraduate, and I only barely passed the tests by listening to the explanations of my friends. For this reason, I feel that fundamental skills are not talent, but rather something to be gained through practice. I teach a class on a method for creating ideas called “thinking process design”. In class, I often talk about the “10,000 hour rule”. This says that you can master anything through 10 hours of practice a day for 3 years.

I expect a certain degree of “momentum” in the students in my lab. I imagine something like Nagatomo, the soccer player who scores even as a defender. In general, I have students in Nakanishi lab write their undergraduate thesis and Master’s thesis by themselves. I want students to learn their own individual skills. If you don’t take my class and study programming before entering the lab, I don’t think you’ll be able to keep up. My ideal is people who can handle the entire process themselves, from creating ideas to giving it shape. My lab is strict, but I believe that it will make you stronger.